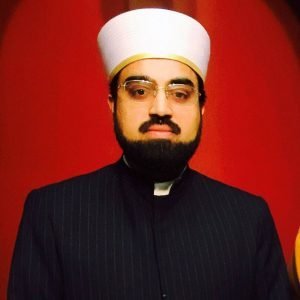 Shaykh Dr Umar al-Qadri is a leading Irish Muslim religious and social thinker and commentator. A qualified theologian and jurist, he works for cohesion, integration and a fairer society from his positions as Chairperson of the Irish Muslim Peace & Integration Council and Chief Imam at the Islamic Centre of Ireland. He is also a SME owner and the father of three loving children.

Dr Al-Qadri promotes a European Muslim identity, encouraging Muslims in Europe to engage fully with a pluralistic vision of our continent as active citizens, and works through his roles as a board member of EULEMA (European Leaders Majlis), European Muslim Forum and as a founding member of MJLC (Muslim-Jewish Leadership Council) to ensure that policymakers consider minority communities at every stage of the formulation of policy and strategy at an EU and member state level.

Born in Pakistan, raised in the Netherlands and, having made Ireland his home for more than two decades, he understands that our complex human narratives do not have to result in isolation or otherisation, but that we can and should embrace our complex narratives in a spirit of solidarity and togetherness. It is this spirit that has seen him forge strong personal friendships and working relationships with majority and minority communities throughout
Ireland and Europe, with a special interest in ensuring socio-economic fairness for marginalised groups and the recognition of equal rights for all.

He has worked with the European Union’s Fundamental Rights Agency (FRA), is an alumnus of the United States International Visitor Leadership Program, as well as working on a several projects tackling Islamophobia and anti-Muslim sentiments. A long-term critic of extremism and radicalisation, he unequivocally condemns Islamist violence whilst calling upon policymakers to tackle the social exclusion that creates the perfect vacuum for hate-preachers to radicalise vulnerable individuals.

As well as his regular contributions in the Irish print and broadcast media as a respected commentator, he has appeared as a keynote and guest speaker in the European Parliament, the US State Department, the UAE Peace Forum, The Kennedy Institute and the British Parliament, as well as delivering presentations and plenaries in various International conferences on social issues on minority rights, climate justice and integration at home in Ireland as well as around the globe.